Our shoes are very personal to us. Not only do we shape them by wearing them. But shoes also shape us and how we feel in them. Shoes can also tell stories about what we have done and where we have been. We keep them as reminders of certain moments in our lives.

When people donate shoes to the collection we are always interested in their personal stories and memories. Here is Irene’s story about her amazing shoes by designer Terry de Havilland.

‘These are my Boing Boing shoes! One day we were passing the Terry de Havilland boutique. The Zebedee shoes were in the window and I could not take my eyes off them! It was not just because they were fantastically unusual, but they were also so elegant, beautifully made and – most importantly – wearable. I knew instinctively that they were very special and I just had to have them!’

Red is a powerful colour

In the month we celebrate Valentine’s day we may not this year have the opportunity to doll up and dine out, but we can still dress up at home, perhaps in these Robert Clergerie designed velvet peep toe court shoes from about 1995.

Red has always been a significant and powerful colour, in part down to the expense involved in obtaining the natural red dye derived from cochineal scale insets found in South America

Red is often been associated with love and passion but has also been worn to convey contrasting messages at different times and in different cultures. Red shoes were the prerogative of Roman senators and later the Emperor King Louis XIV of France adopted red as the colour of nobility. He covered his wooden heels in red leather to indicate status and wealth. In China, red bridal shoes are thrown on the roof of the newly married couple’s home to ensure happiness and a long marriage.

Contemporary examples include Dorothy’s ruby slippers in The Wizard of Oz, which were essential for her to fly home to Kansas and the demonic red ballet shoes that lead Vicky the main character in The Red Shoes, to her death.

Valenki are traditional Russian footwear worn in the winter months. The boots are made from sheep’s wool and manufacturing takes a couple of days, with most of it still done by hand.

The raw wool is prepared and a special machine helps to make the non woven wool fabric into rolls. The Valenki makers then make a stocking which is several times larger than the final boot, which is boiled to make the fabric denser. The boot is then shaped over a wooden form and left to dry.

Valenki are not water-resistant but are good for wearing on dry snow when the weather is cold and frosty. Their soles can wear out quickly and are sometimes soled with leather or rubber, but many people simply buy a new pair each year.

This children’s pair from 2000 have a leaf design on the leg.

Wishing you a boot-iful time Northampton Museum and Art Gallery is home to one of the largest collections of shoes and shoe heritage in the world. The collection’s strength lies in its very broad range, from Ancient Egypt to the latest fashions, from workwear to high-end designer creations and from Northamptonshire-made shoes to footwear from around the world. But we don’t just collect shoes. The scope of the collection covers accessories including buckles and laces, shoehorns, shoe trees, spats and polish, shoemaking tools and machines, catalogues, trade journals and photographs and paintings and prints depicting shoes and shoemaking. This postcard shows a well-worn pair of boots which are not the most Christmassy of images, but perhaps because they are very well worn, they symbolise the wearer’s very essence, strength and luck, attributes that can be positively passed to others. So, the sender of this postcard is sending the recipient lots of luck, hope and strength for the future. Unfortunately, the card was never written on so sadly we don’t know who it was for.

Remembrance Day on November 11, 2020, also known as Armistice Day, marks 102 years since the end of the First World War. People in Northampton and Northamptonshire have specialised in making shoes for hundreds of years. Their shoemaking reputation as producers of good quality men’s footwear and military footwear was sealed in 1648 when shoemaker Thomas Pendleton obtained a contract for 2,500 shoes to be made for Oliver Cromwell’s parliamentary army going to Ireland in 1649. The United Kingdom manufactured about 70 million pairs of boots and shoes for the Allied armies during the First World War, and 50 million of these were made in Northamptonshire. This 1914-18 British Army boot. Regulation No 2, Eton Balmoral boot, was manufactured by Simon Collier Ltd, Harlestone Road, Northampton. They boasted that the two million boots they made would stretch in line toe to heel from Northampton to Edinburgh.

In the pink Pink is a controversial colour evoking strong feelings of attraction and revulsion. Before the late 1600s, pink was often ignored in favour of shades of red and there was no word in the English language to properly describe it. During the 1700s in France, pink was a fashionable ‘new’ colour and was worn by both men and women as a sign of taste and class. This pair of women’s pale pink silk damask buckle latchet shoes are from the 1740s. From around 1660 highly decorative shoe buckles were worn, first by men with women adopting them later, perhaps because their shoes were hidden beneath long skirts. Buckles then became the prevailing style until the time of the French Revolution of 1789. Another feature of women’s shoes at this time was the white kid-leather rand. The rand is the narrow strip of leather that sits between the upper and sole. It was easier for shoemakers to sew the delicate upper to the soft leather rand first and then sew the rand to the sole.

The nineteenth century fashion for boots particularly for outdoor wear meant etiquette required a change of shoe once indoors. For both men and women, the indoor slipper became popular.

For men the basic style was a tabbed fronted slip on shoe often worked in a Berlin wool design, tapestry or kelim tapestry weave. This style eventually became known as the Albert slipper, in which the vamp extended upwards to form a tongue resting on the foots instep. The style has remained a classic. Today the Albert slipper is usually made from black velvet with a quilted lining and leather sole.

These slippers sport a wool cross stitch design of stars and circles and are dated 1870-90s.

Emma Hope designed this mule. Made of red velvet, the front section of the shoe, known as the vamp, is decorated with a gold thread diamond design with glass beads. An applique design in gold and cream leather of two cupids is either side of a large gold heart. The embroidery was by Karen Spurgin, 1987-94.

Emma Hope’s tagline is ‘Regalia for Feet’ and anyone celebrating Valentine’s day would surely have a great time in such a romantic design. 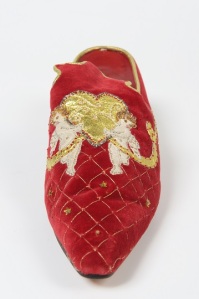 Instead of Christmas jumpers we have Christmas slippers.

These Rudolph slippers complete with antlers and red noses were made in 1998 by ‘Kekko Fun Slipper’ in Korea. For many people the song of the misfit reindeer saving the day is an integral part of Christmas.

The first reference to Santa Claus having eight reindeer to draw his sleigh is in Clement C. Moore’s 1823 poem ‘A Visit from St. Nicolas.’ So like many other Christmas traditions – Christmas trees and turkey – Rudolph was established as part of nineteenth century folklore.

Happy Christmas from everyone at Northampton Museums!

These amazing shoes were made Kumiko Nishibuchi in 2007 whilst she was undertaking a shoemaking course at Tresham College in Northamptonshire.

They are a pair of women’s beige leather open toed court shoes with looped straps of leather across the instep. They have a removable collar that forms a fan framing the back of the shoe, attached to the high, tapered heels with Velcro.

Would you wear these?